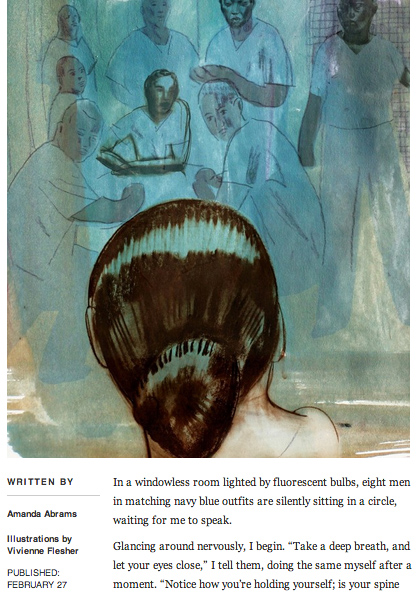 “In a windowless room lighted by fluorescent bulbs, eight men in matching navy blue outfits are silently sitting in a circle, waiting for me to speak,” writer Amanda Abrams recounts of her first day as a volunteer meditation teacher in the D.C. Department of Corrections’ Residential Substance Abuse Treatment unit.

Going through the motions of teaching meditation to the group of 8 male prisoners, and getting to know a few of the inmates sticking with the voluntary class, Abrams reflects on how her teaching experience and the feedback she’s received from inmates speaks to how meditation can help.

To answer that question, Abrams speaks with Fleet Maull, founder of the Prison Mindfulness Institute, who started his work in 1989 while he was serving a 14-year sentence for drug trafficking. 24 years ago, he started teaching meditation to fellow inmates. PMI’s flagship program, Path of Freedom, is offered in prisoner in several states, and in some prisons in Canada, Sweden, and Chile. More than 200 facilitators have been trained to lead the program.

“There are more and more people on the outside who are getting interested in taking meditation programs into prisons and jails,” Maull says. Out of the 2.4 million people incarcerated, he estimates the number of offenders taking meditation at 50,000.

One five-year study, launched in 2011, will measure the success of Path of Freedom, as reported in the August issue of Mindful magazine.