When I was a boy, the battlefield at Gettysburg was a playground to me. We lived over the mountain from this famous hallowed ground, and my friends and I went there to play war, as boys are wont to do. We wore pretend uniforms of blue and gray. We climbed over and around the rocks at Devil’s Den, pretending to be sharpshooters. We clambered bravely and valiantly up the slopes of Little Round Top, huffing and puffing and spewing out bloodcurdling cries. We re-enacted Pickett’s Charge and came to an untimely end in the Peach Orchard and the Wheatfield.

We didn’t think of the place by its official name, The Gettysburg National Military Park, a carefully tended monument to the bloodiest three days in American history. More than 160,000 soldiers battled there from July 1 to 3, 1863, and almost a third of them were killed, wounded, or missing over those three days. Gettysburg would turn out to be the climax of four years of national bloodletting, resulting in an estimated 750,000 dead, mostly young men and boys—a generation depleted and demoralized. A deep wound. At Gettysburg, you feel it up close.

Our war was different. When we fell in battle, we did so with silent-movie histrionics. But soon we would rise again, uttering the magic formula, “I’m a new man.” Then, it was time for lunch.

A boy’s view of war is a fool’s view of war. Perhaps that’s why in America and in countless countries across the world, we send mothers’ sons (and now daughters), still baby faced, to killing fields to settle our scores and reconcile our differences. We deploy the logic of boys playing at war.

But real war is for keeps.

Of those who survive, many are physically or mentally disfigured. In America today, 22 veterans a day commit suicide. The families and communities the combatants come from are devastated; cities and towns in the way of battle are transformed beyond recognition; Predator drones and pipe bombs maim and kill in sudden indiscriminate bursts. This is the terrible cost of conflict by violent means. And yet the cost is so easy to forget when anger takes hold.

As I grew older, I stopped going to the battlefield to play at war. Sometimes in high school and college a group of us would go there at night and drink and carouse in the big open spaces, drawn by the eeriness of the landscape but oblivious to its sanctity. Eventually, after my father died and all my siblings had moved away, my mother left the area. My trips to Gettysburg stopped and my memories of the place receded.

Decades later, my mother moved back to live in a nursing home nestled on the side of the mountain just west of Gettysburg, near the spot where General Robert E. Lee set up headquarters just prior to stumbling into the worst fight of his life, the one that would prove his undoing.

I began stopping in Gettysburg on my way to see my mother. In the quiet of the evening I would look over the field where the Confederates charged ceaselessly, senselessly, to their deaths, wave upon wave grinding against the fearsome metal fired at them from Union guns and cannon trained down on them from the gentle incline of the justly named Cemetery Ridge. I walked amid the grave markers at the cemetery dedicated by Abraham Lincoln in his Gettysburg Address.

I started taking my mother with me on excursions to the battlefield, trying to learn more precisely what took place there. The battlefield guides working with the National Park Service gave us the lay of the land on three-hour tours. I read The Killer Angels,, Michael Shaara’s novelistic treatment of the battle. I watched the movie Gettysburg and Ken Burns’ epic documentary, The Civil War, built on first-person accounts. I read the lofty, elegiac prose of Shelby Foote in his account of the battle, Stars in Their Courses. I studied Thomas Desjardin’s These Honored Dead: How the Story of Gettysburg Shaped American Memory, which makes clear that not long after horrific events we paper over the rawness with storytelling that makes a tidy package of what was, in truth, a chaotic mess. Our national myths demand it.

I was deeply saddened by what I read, by what I saw.

Now, when I looked on these fields, I saw something that the boy who played war had not seen. I saw death, occurring repeatedly, brutally, and in large numbers. And not by accident or calamity, but systematically, by design. If you know what you’re looking at, as you gaze upon this well-preserved open-air museum and linger there, you can see the 8,000 dead and the 4,000 horses rotting alongside them in the midsummer heat. You can understand why Abraham Lincoln was so sad and so mortally exhausted by this war that he would say, “Nothing touches the tired spot.”

When Lincoln traveled to Gettysburg four months after the battle, the area was still devastated, a horror show of makeshift graves, dug up from time to time by marauding hogs. The town remained enveloped in the stench of war. It was not a scene that inclined one to think of glory or heroism. And Lincoln did not dwell there in his little three-minute speech. He went deeper. He redefined the country’s past, implying that the phrase “all men are created equal” must now include all. And he offered an agenda for the future:

“…It is for us the living, rather, to be dedicated here to the unfinished work which they who fought here have thus far so nobly advanced. It is rather for us to be here dedicated to the great task remaining before us—that from these honored dead we take increased devotion to that cause for which they gave the last full measure of devotion—that we here highly resolve that these dead shall not have died in vain—that this nation, under God, shall have a new birth of freedom…”

As Yale history professor David Blight has written, Lincoln called out to the living, proclaiming that they were (and we are) “compelled to remember, and from the stuff of memory, create a new nation from the wreckage of the old.”

It’s worth contemplating on the 150th anniversary of the Gettysburg Address what unfinished work we still have to do, not just Americans but everybody seeking to find some peace and unity in the wreckage of a divided, chaotic world. It is worth remembering the spirit of those 270 words: that we are equal despite our many differences, and if we cannot resolve those differences except through violent means, we may not long endure. We cannot let our differences make us forget our fundamental equality, that which unites us all. Can real contemplation of the facts of a place like Gettysburg strengthen our resolve to continue this unfinished work? 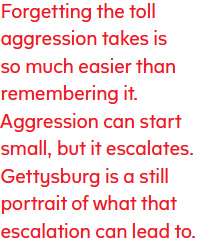 On my visits to Gettysburg over the years, I’ve encountered many people from many different places. Under the torch of the eternal peace light memorial—inscription: Peace Eternal in a Nation United—a nine-year-old girl tugs at her father’s sleeve and asks, “How do you know who wins or loses?” Tour groups in multicolored commemorative T-shirts pour off buses bored and sweaty, dazed, unsure what you’re supposed to do for amusement at a battlefield. A middle school history teacher from Hawaii remarks on how much less abstract the war is when you visit the battlefield up close, and “how sad it must have been for these boys to fight and die so far from home, how lonely.” A college professor from Maryland muses that the young people he teaches are the same age as the thousands who were mowed down in the field before him. A high school teacher from Massachusetts notes that we “see the thing as a whole now; those young men only saw their little piece of it.” After listening to an historian describe Pickett’s Charge in detail, an older man pauses, turns away, takes off his Ray-Bans, and wipes his eyes. A black bus driver from Richmond, Virginia, tells me that this is where civil rights in America were born and “the fact that we are one nation instead of just many states was established here. Lincoln knew that was the reward, but he also knew the terrible price that had been paid. You go to Disney World to be entertained. You come to Gettysburg to learn, to stand here and gather a sense of what this nation is.”

Visit Gettysburg. If you have children, take them. Don’t breeze through. Stay awhile. Camp there. Don’t be pulled away by the cheesy commercial distractions of ghost tours and wax museums. Hire one of the guides to give you a tour and show you what transpired. You will be shocked and moved. By all means, let your children appreciate the bravery of those who fought there—it was monumental. But don’t let this lesson be lost: we will inevitably dispute—and deeply—with each other, but the results are catastrophic when we ignore how interconnected we are and leave ourselves no means other than aggression to navigate our differences.

Aggression can start small, but it escalates. Gettysburg is a still portrait of what that escalation can lead to.

These are lessons not for American history class alone. Forgetting the toll aggression takes is so much easier than remembering it. It’s easier to justify fighting as the solution to our inevitable opposing interests and viewpoints. The ultimate reason to remember Gettysburg is not so much to replay the exploits of the victors and the vanquished. It is to remember, to mourn, how much is lost when we, each of us, choose to fight to the death.

A Guided Practice to Connect with What Matters Now

It’s so easy to get caught up in the chatter of our own thoughts. Founding Editor Barry Boyce guides us through a practice to cut through the noise and take time for what matters. Read More

Can Mindfulness Help Us Dismantle Inequality?

The same mindfulness practices that transform problematic habits and thought patterns can help us tune in to the subtle ways that society cultivates barriers and “draws us to reinvest in segregation,” says mindful law expert Rhonda Magee. Read More

Following the Path of Mindfulness

Mindful editor Anne Alexander invites us on the journey of deepening our sense of wellness through mindful ways of thinking and being. Read More

Using the Body and Breath to Get Out of Your Head

We often practice mindfulness in stillness. Here, Cara Bradley shares how mindful movement and breath awareness can help us shift away from stress. Read More