A remarkable week for mindfulness in the UK. Five hundred delegates have been attending the fully-booked Mindfulness In Society conference, braving unseasonal snow to converge on the northern English city of Chester. Another packed gathering follows in London as Jon Kabat-Zinn, pioneer of Mindfulness-Based Stress Reduction (MBSR), addresses a Mindfulness in Schools conference and gives a talk for the influential Action For Happiness movement.

The demographics of this weekend’s conference were interesting. A fellow attendee told me on arrival there were ten women here for every man. Most were professionals working in the field (what’s the collective noun for mindfulness teachers? A presence? An inquiry? An invitation?) and there has been a strong sense of shared appreciation at feeling part of a growing community. Jon Kabat-Zinn once had a vision that skilled and committed meditators might make an ethical living sharing their practice for the benefit of others. Walking around the conference hotel, that vision came to life around him. Chester felt like an attentive, non-judgemental place to be the last few days.

Saturday was the start of the conference proper, and the wealth on offer—dozens of presentations on various aspects of meditation research—felt at times overwhelming. It was a challenge to stay centred in the heart with so much material that engaged the head. With the question ‘are mindfulness courses helpful?’ seemingly settled among scientists, the major focus of study seems now to be shifting to how they help—the so-called mechanisms of mindfulness.

Shauna Shapiro, associate professor of counselling psychology at Santa Clara University and one of several visitors from the US, gave a passionate keynote on the importance of intention and attitude (or, quoting Jack Kornfield, “setting the compass of your heart”). Emphasising that mindfulness is a way of shifting our relationship to experience—re-perceiving—Shapiro suggested this was an extension of developmental stages that human beings go through as children, but which continue further if we consciously practise. As youngsters we realise we are not fused with other people, and in meditation we see we are not fused with our thoughts. When this unfolds, the separate sense of self, which emerged as we grew up, falls away again, this time not into unconscious fusion but to ‘simply awareness happening’. As the sense of self drops away, so can the suffering that comes with it.

This was a theme warmed to by one of the day’s later speakers, John Teasdale, co-developer of Mindfulness-Based Cognitive Therapy (MBCT). Teasdale reflected on why zebras don’t get ulcers—unlike humans, they don’t abstract into past or future rumination, with all the stress that creates. But rather than romanticising the simple (and limited) life of a zebra, Teasdale explained that by holding our minds in kind awareness, we can move into what he called ‘post-conceptual knowing’—allowing the benefits of planning, reflecting, and learning, without the attendant distress. An enlightened zebra, perhaps?

With his complex models of modes of mind (not to mention the rest of a day jammed with ideas and data), Teasdale warned that our minds might get full, and so it was a delight to be released into a day of practice on Sunday, led by Kabat-Zinn. To the bemusement and amazement of hotel staff, their buzzing guests suddenly went silent and spent the day sitting quietly and attentively, with occasional breaks for walking and eating meditation in the foyers (cue even more bemusement and amazement). As our teacher joked from his meditation cushion at the centre of the stage: “It seems like something’s happening, and yet nothing’s happening.” 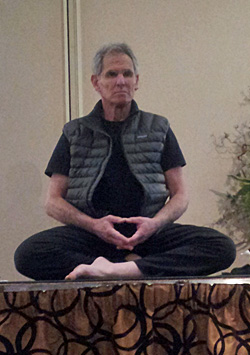 “If you’re tweeting that you’re meditating with Jon Kabat-Zinn, then you’re not!” Kabat-Zinn warmly warned conference-goers.

Warm, funny, sharp, humble and wise, it’s difficult to convey the joy of spending a day practising with Kabat-Zinn, and he effortlessly riffed his way through zen koans, cutting-edge science, the perils of technology (“If you’re tweeting that you’re meditating with Jon Kabat-Zinn, then no, you’re not!”), stories from the early days of MBSR and the need for a new medical paradigm that nurtures what’s already right with people rather than just focusing on their ailments. Gently prodding his audience to greater insight through guided practice and keen dialogue, he reminded us it was time to live up to our species’ Latin name – homo sapiens sapiens (“Beings that know that they know”).

The day concluded with a celebratory dinner, prefaced by a stirring speech from UK Member of Parliament, Chris Ruane, who has recently tabled more than 400 mindfulness-related questions in the House of Commons. A confirmed advocate of mindfulness in politics, Ruane has rounded up an all-party group of MPs and Lords to take an eight-week mindfulness course, the final session of which Kabat-Zinn will be invited to address later this week.

Kabat-Zinn continued with a keynote yesterday morning, expanding on the need for a healthcare rather than a ‘disease-care’ system. He pointed out that meditation and medicine have the same derivation (meaning “right inward measure”), and that the Buddha’s four noble truths are actually a medical diagnosis (including favourable prognosis and treatment plan) that came from a physician who claimed to be not a God, but simply an awake person. He highlighted Norman Farb and colleagues’ 2007 study which showed that teaching people mindfulness enables them to shift their brain activity from the default, narrative network (active when we default to thinking in conceptual terms, often about ourselves) to an experiential network which comes on-line when everything—including us—is felt as more of an unfolding process. Concluding with a quote from Einstein (“The true value of a human being is determined primarily by the measure and the sense in which he has attained to liberation from the self”), it felt that we had come full circle from Shauna Shapiro’s opening talk two days earlier.

The conference continues until Tuesday, with presentations and dialogue on topics such as Mindfulness in The Workplace and the ongoing integration of mindfulness-based approaches into the UK National Health Service (MBCT has been a government-body approved treatment here since 2004), before the focus shifts south to London. We were reminded several times over the weekend that mindfulness remains “just a pimple on the elephant” in terms of its global influence, but is nevertheless becoming “a liberative meme” with the potential to relieve all manner of suffering in a stricken world. Something mindful surely seems to be happening in the UK right now, even if, in words Kabat-Zinn borrowed from our own William Shakespeare, it looks like much ado about nothing.

Can a Mindfulness-Based Therapy Replace Opioids?

As opioid addiction rates continue to climb, some chronic pain patients find that mindfulness helps by opening up space for acceptance and curiosity. Read More

Ed Halliwell is a mindfulness teacher and writer, based in Sussex and London, UK. He is author of three books: Into The Heart of Mindfulness, How To Live Well By Paying Attentionand (as co-author)The Mindful Manifesto and teaches courses and retreats to public groups, in organizations and to individuals, face-to-face and online via Skype. He is also an advisor to The Mindfulness Initiative, which is supporting the Mindfulness All-Party Parliamentary Group to develop mindfulness-based policies for the UK.