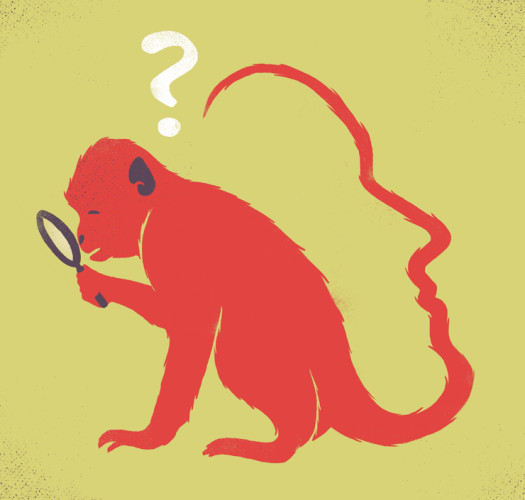 Is actor Kirk Douglas alive or dead? When did Tom Cruise and Nicole Kidman get divorced? What’s U2 frontman Bono’s real name? Unless you’re a close personal friend of any of these celebrities, knowing the answer has no meaningful effect on your life—yet if you’re anything like the office full of people I tried this on you’re at least a little itchy to whip out your phone or dash over to your computer for answers. There’s even a website (or two… or three… ) devoted entirely to informing you which famous people have shuffled off this mortal coil.

Curiosity. It has “its own reason for existing,” physicist Albert Einstein wrote, and is, according to 18th-century English writer Samuel Johnson, “the first passion and the last.” We all know what killed the cat, so perhaps 17th-century philosopher Thomas Hobbes was right when he called curiosity “the lust of the mind”—since in a lustful state we (and perhaps felines?) toss self-preservation to the winds. But considering how common curiosity is, scientists who study the mind are only beginning to fathom where it comes from, what it’s good for, and what happens when we have a lot or not much of it.

Although there are tantalizing hints to all these questions, definitive answers remain elusive, which is… curious. “Curiosity is a basic component of human nature,” said Benjamin Hayden, an assistant professor of brain and cognitive sciences at the University of Rochester. “Just think of how much time we spend browsing the Internet, reading, or just gossiping. Nature seems to have endowed us with a desire for information that’s so strong it operates even when it doesn’t help us go out and hunt down a woolly mammoth.”

This need to know propels children to look under rocks and behind curtains, dogs to sniff a stranger, busy people to look up answers to trivia questions. In many cases curiosity is not in service of our basic needs for food, reproduction, and overall survival. That’s all evolution supposedly cares about. So how can curiosity be such a central, unshakeable mental trait that it is wired into primate brains by eons of evolution? When lab monkeys are given a choice between two games, each of which has a 50-50 chance of winning them a sip of juice, they prefer the game where they learn whether they won or lost immediately, thus instantly satisfying their curiosity, even when the actual payoff (juice) arrives no sooner. “The monkeys’ choice of an option that immediately resolves uncertainty suggests how strong the drive is to satisfy curiosity,” Hayden said. Monkeys are even willing to pay for that: They’ll give up 25% of the promised juice reward if they can learn immediately whether or not it’s coming. As Hayden and his Rochester colleague, Celeste Kidd, explained in a 2015 paper in Neuron, “Monkeys choose information even when it has a measurable cost.” Pigeons, too, will pay to satisfy their curiosity, giving up one-third of a promised food reward if it will buy them information, a 2010 study found.

People behave much the same. Study after study shows we are willing to pay for answers to trivia questions right now even though we could have looked up the answers for free later. Trivia information “is demonstrably useless,” Hayden said. Yet we’re wired to want it anyway: Brain regions that become active when contemplating the arrival of a reward are also active when people feel curiosity. “We’re just starting to open up the brain with neuroimaging and see where curiosity is happening,” Hayden said, “but the fact that it’s associated with reward circuits supports the idea that curiosity makes us anticipate a reward,” satisfying our cognitive hunger.

With its deep evolutionary roots, curiosity can be so compulsive it makes us binge-watch Breaking Bad (what happens next??!!), and feel anxious and deprived if one of our favorite shows is cancelled before all the plotlines are resolved (Forever, I’m looking at you). Such a strong drive, some biologists believe, must have benefits. Otherwise evolution would have snuffed it out, especially since too much curiosity, or misplaced curiosity, can be deadly (I wonder what these wild mushrooms taste like?). “The perils of curiosity suggest it must have some real, and important, survival benefits to balance out risks,” said Hayden. “We think curiosity activates learning systems in the brain.”

That jibes with what the founder of American psychology, William James, proposed in 1899: that curiosity is “the impulse toward better cognition.” That idea has stood the test of time. The best way to understand curiosity, cognitive scientists believe, is as the mental analogue of physical hunger: Just as the feeling of an empty stomach drives the search for food (good for survival), so the feeling that there is a growling hole in your store of knowledge drives the search for information. This feeling of cognitive deprivation, and the attendant urge to sate that intellectual hunger, is “associated with persistence and solving problems,” German and American researchers reported in a 2013 study in the Journal of Individual Differences.

That may be why the most curious children are the best learners. A 2011 review of about 200 individual studies concluded that, although intelligence is the strongest predictor of academic success, curiosity plus effort “rival the influence of intelligence,” scientists in Britain and Switzerland wrote in Perspectives on Psychological Science. “A ‘hungry mind,’” they concluded, “is a core determinant of individual differences in academic achievement.”

The link between curiosity and learning persists well into adulthood. In a 2015 study, scientists had younger adults (average age: 20) and older adults (average age: 73) read 60 trivia questions such as, “what product is second, only to oil, in terms of the largest trade volumes in the world?” and “what was the first nation to give women the right to vote?” Everyone rated how curious they were about the answer, which they were given. Curiosity had a substantial effect on how likely the older adults (but not the younger) were to recall the answers a week later, psychologist Alan Castel of the University of California, Los Angeles, and colleagues reported in Psychology and Aging.

And about that dead cat: Research suggests curiosity can keep us young. A 1996 study of 2,153 70-ish men and women found that the more curious they were, in general as well as when presented with questions, the more likely they were to be alive in five years. It was the first study to identify curiosity as a predictor of longevity.

How might one stir up curiosity, and boost not only memory but longevity? Since curiosity reflects cognitive deprivation, the analogy to physical hunger applies: “A small amount of information whets the appetite for more,” said Hayden. So sample lots of what information sources have to offer and let your curiosity run wild.

Oh, and if you’re curious about the answers: The researchers posit that coffee is the second-most widely traded global commodity and New Zealand led the way in women’s suffrage. If you’re wondering about those celebrities I mentioned, indulge your curiosity. It’s good for you.

This article also appeared in the June 2016 issue of Mindful magazine.

Using the Body and Breath to Get Out of Your Head

We often practice mindfulness in stillness. Here, Cara Bradley shares how mindful movement and breath awareness can help us shift away from stress. Read More