You’ll become obese and possibly addicted to illegal drugs or painkillers, you’ll run out of money during retirement, you’ll become a compulsive gambler and an alcoholic. And all because you just couldn’t resist devouring the marshmallow right now, could you?

For decades psychologists have dangled that grim future in front of people who choose immediate gratification rather than the postponement of same. The marshmallow reference is to the classic experiment in which researchers told 4-year-olds they could eat the tempting marshmallow in front of them now or, if they waited a bit, have two. The best postponers turned out to achieve greater academic success, higher emotional intelligence, and other accomplishments than the eat-it-now children. That result has been generalized into psychological dogma: that how much of an “immediacy bias” you have is essentially innate and immutable, and that “I want it now” causes consequences like those above.

New experiments and a new look at classic ones, however, are undermining that dogma, especially the “immutable” and causal parts. Instead, “an emerging body of evidence indicates that intertemporal choice is malleable and can be profoundly influenced by context,” psychologist Elizabeth Phelps of New York University argued in a 2016 paper. Just because you chose one marshmallow now rather than two later doesn’t mean you are doomed to a “tyranny of now.”

In general, people who value future rewards only slightly less than present ones are willing to make sacrifices today for a better tomorrow. We study today (sending regrets to the friends who asked us to hang out) in order to reap the reward of good grades; we save now so we have money in the future.

Although the marshmallow experiment has been interpreted as meaning that the degree of one’s immediacy bias is innate, new research shows that instead it depends on context, on what other options are available, and on how they’re described—that is, by factors beyond your character. Which means you can manipulate that context if you need help taming the tyranny of now.

One such influence is the “decimal effect.” Asked whether they’d like $9 today or $11 in a week versus $8.44 today or $10.32 in a week, people are more likely to choose to take the money now if choosing between the round numbers. Less deliberation is required to process round numbers, which leaves your attention free to focus on the delay (boo, hiss). If you need an incentive to save money, tell yourself the choice is, say, $219.66 today vs. $377.92 (not round numbers) in the future; it may distract your attention from today vs. tomorrow enough to focus on less money vs. more.

Then there’s the “magnitude effect,” in which higher amounts reduce the tyranny of now. Even people with the utmost self-control and ability to postpone gratification would take $20 today instead of $30 in six months; $10 just doesn’t seem like enough of an incentive to wait half a year to go buy myself a nice lunch with this free money. But we’d postpone a $1,000 reward in favor of $1,500, even though the incentive is the same 50%. Contrary to what many researchers assumed, people consider the absolute and not the relative cost of waiting. People tagged in lab studies as having a strong immediacy bias might have no such thing if the rewards had been larger. 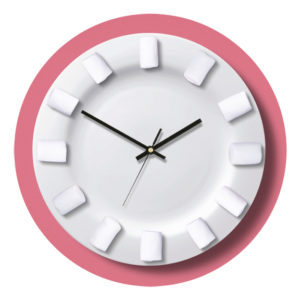 Similarly, imagining specific ways to spend future rewards—literally, if the reward is money saved and invested, or figuratively, if the reward is more education or health—makes people more likely to forego an immediate reward. Rather than saying, oh how nice, I’ll have $57,485 when I retire, think of specific uses for the money—even in fine detail like having “$65 for dinner out every week.” Also tell yourself that you’re going to reap that reward on, say, April 6, 2039, not “in 22 years”: we’re better at imagining a future on a specific date.

Another strategy is to make the $0 in the future explicit. Tell yourself the choice is spending $1,075 today on that great laptop but having $0 in 30 days versus $0 today but $1,176 in a few months (let’s assume you put it in a hot mutual fund). Making the zero in the future explicit leads to a greater willingness to postpone immediate indulgences, Phelps said: it makes you “focus on the unpleasant future consequences of selecting the immediate reward.”

If some of these ways of thinking sound like the sort of things mindfulness can foster, you’re right. A 2014 study by researchers at Utah State University found that such training (a 60-to-90-minute session) reduced the tyranny of now, making people willing to accept less for postponing gratification. That may seem surprising, since mindfulness meditation is about the present moment, and the nonjudgmental observation of the thoughts and feelings coursing through your mind. Yet with practice, it can make us value the future more highly.

When Cause-and-Effect Gets Out of Hand

The reason I gave examples of how certain framings can affect our immediacy bias was not just for self-help. It was also to point out that many lab studies, which almost never controlled for things like the decimal effect or the magnitude effect, unfairly labeled as flawed and possibly destined for failure people who weren’t. Even more serious, the field likely got a key detail wrong: what is cause, what is effect, and whether the tyranny of now explains all the ills commonly blamed on it.

Let me give a couple of examples:

• In one classic study from 1998, researchers compared the time horizons of 34 heroin addicts and 59 healthy volunteers. The latter looked ahead 4.7 years, while the addicts imagined their futures only nine days away, found psychologist Warren Bickel of Virginia Tech, who argued that this “foreshortened future” explained the addicts’ decisions: if you care only about the next nine days, then of course you’ll fail to consider the long-term consequences of addiction.

• People with less education and lower income likewise tend to devalue future rewards (compared to people higher on the socioeconomic ladder). That led to the belief that their immediacy bias is the cause of their failure to “succeed”; clearly, they played and indulged and wasted time and spent money like sailors on shore leave rather than studying, hustling for jobs, and saving for the future.

What’s wrong with these pictures? In reverse order, it doesn’t take much imagination to suspect that the limited time horizon of people in poverty is not the cause but the effect of their poverty (is it even possible to open a savings account or pay for college when my family could be on the streets tomorrow despite my working two jobs to make rent?), and that the addicts were behaving perfectly rationally for people who had no future. The more uncertain a promised outcome of a behavior is, said Bickel, the less the motivation to carry out that behavior. In a world characterized by risk and uncertainty, he said, “the adaptive strategy may be to consider only the immediate consequences of a behavior.”

The science of intertemporal choice has been too hasty to condemn people who don’t follow the nice middle-class rules about postponing rewards today for better ones tomorrow. When you feel like forces beyond your control determine your fate, it makes little sense to sacrifice for tomorrow if that sacrifice might not yield the promised reward. On the other hand, if you live with a great deal of socioeconomic privilege and simply have a hankering for a marshmallow right now, that does not (necessarily) mean you’re doomed for life.

In the Stanford Marshmallow Experiment, a series of studies in the late ’60s and early ’70s, children between 3 and 6 years old were left in a room with a treat. If they waited 15 minutes, they were told, another treat would appear. If they were not able to delay their gratification and gobbled up the treat, no second treat for them! Follow-up studies claimed that those who waited had better life outcomes in terms of health, education, and well-being. The study has been widely quoted in popular literature to warn of the perils of being unable to control yourself. Recent research suggests the effects of not delaying gratification have been overstated.

This article originally appeared in the December 2016 issue of Mindful magazine.

How to Show Up Intentionally and Lovingly in Difficult Situations

Shalini Bahl-Milne shares three mindful steps that empower us to be present and act with integrity and joyfulness. Read More