‘Tis the season for self-judgment! During the holidays, the comparing mind kicks into high gear as we measure ourselves against our friends, family, colleagues, as well as the “ghosts” of past and future visions of ourselves and find that we are coming up short. In Charles Dickens’ famous Christmas Carol, the stodgy and stingy Ebenezer Scrooge learns to embrace gratitude and attunement for those around him. How about we take a page from Dickens’ book and not only attune to others this holiday season, but do so toward ourselves as well.

As a clinician, I’ve been trained to spot and address the unhealthy mental habit of repetitive and negatively-toned inner chatter that broils in our minds and bodies from the inside. Rumination (or repetitive and passive thinking about negative emotions) has been shown to predict the chronic nature of depressive disorders as well as anxiety symptoms. Another study suggested that people with a ruminative style of reacting to their low moods were more likely to later show higher levels of depression symptoms. When we ruminate about our shortcomings and failings, we spend too much time in our heads instead of living our lives. We focus on berating ourselves internally instead of actually enjoying the holiday.

When we ruminate about our shortcomings, we spend too much time in our heads instead of living our lives. We focus on berating ourselves internally instead of actually enjoying the holiday.

And it’s not just my patients who ruminate negatively about themselves—it could be me, for instance, telling myself over and over that I’m an “absolute failure” as a therapist for not paying attention to a patient for a split second during a session. Or eviscerating a future version of myself based on a minor faux pas last week. Rumination is the run-on self-talk of the mind that has agitated energy as both its fuel and its output. Ruminative thinking is toxic to our well-being and clarity of mind.

So how do we work with rumination? One way forward is self-compassion. Self-compassion is far more than chasing rainbows and skipping after unicorns. According to psychologist and researcher Kristin Neff, self-compassion is self-kindness (versus self-judgment), combined with a sense of common humanity (versus being alone with what’s hard) and mindfulness (versus being over-identified with bad feelings). Self-compassion is seeing our pain as part of the larger, universal picture of being human, and seeing ourselves as worthy of kindness and care. And it’s not weak or passive, or narcissistic and self-indulgent. It takes guts to practice, and science shows that it can do much to lower anxiety, stress reactions, depression, and perfectionism. It can open you up to your life whereas your old patterns or reaction and self-judgment close you down.

In a 2010 study examining the levels of reported self-compassion, rumination, worry, anxiety, and depression in 271 non-clinical undergraduate students, results suggested that people with higher levels of reported self-compassion are less likely to report depression and anxiety. The data showed that self-compassion may play the role of buffering the effects of rumination. In some of the practices that follow, we learn how to unhook from rumination and cut ourselves (and others) the slack requisite for increasing clarity and ease of being.

The following brief self-compassion practices are drawn from my co-authored card deck (along with clinicians and authors Chris Willard and Tim Desmond) “The Self-Compassion Deck” (PESI Publishing & Media). What follows are three cards from our deck laid out in a sequence that is intended to help you sidestep the self-judgment / ruminative cascade and build a foundation of self-compassionate, flexible space—something much needed this time of year!

As with many mindfulness practices, this one is best conducted in a quiet space, with your body in a comfortable, alert posture. Take in a few slow, deep breaths and then read these three cards in order. Pause for 30 seconds or more with each card.

Watch what arises in your body and mind as you come to rest on the words (and underlying meaning) of each practice. Just allow yourself to observe what shows up, and if your mind goes into its loops of rumination, just gently come back to the card and its self-compassionate intentions.

1) Send your past and present self kind wishes 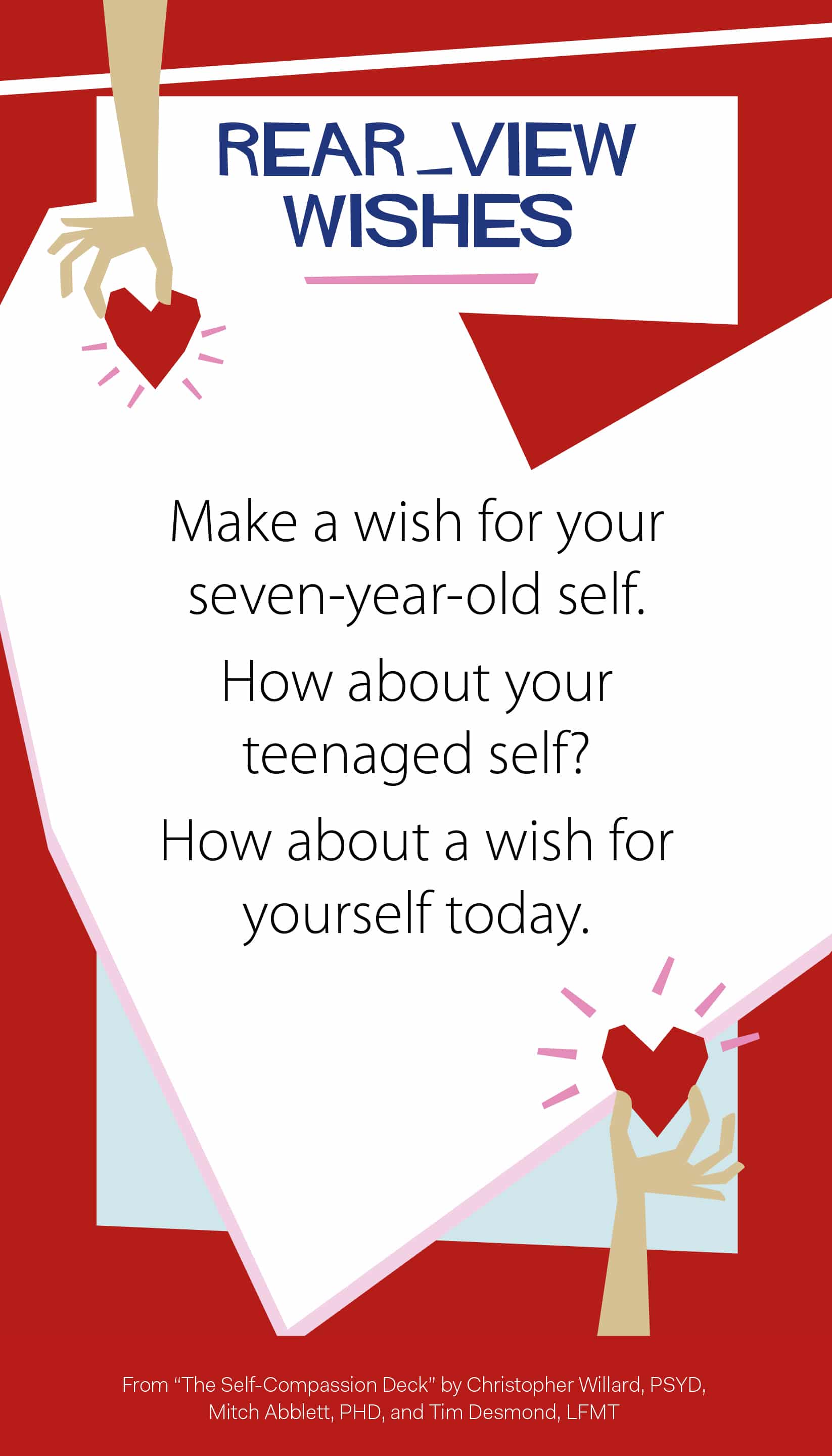 Pause and take in what emerges for you about giving kind wishes to yourself at various stages of your life. At what points in your life is it easier / harder to conjure self-kindness?

2) Choose an act of self-care 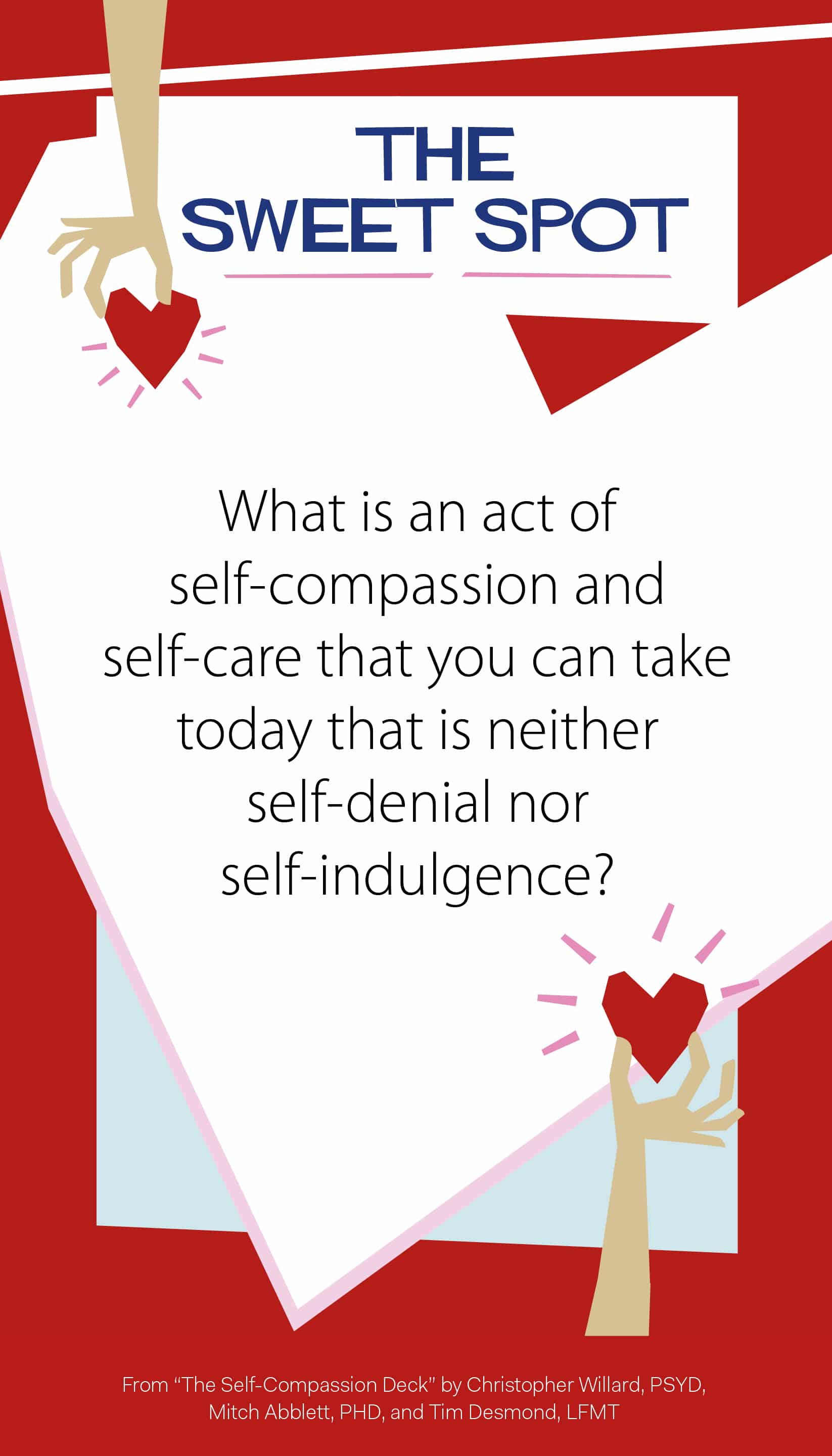 Notice what ideas show up when you think of what might do to legitimately take care of yourself today. Does your ruminating mind immediately throw up any roadblocks? Any “well, but’s …”?  Are you willing to “thank” your mind for sharing these, and do the self-compassionate act anyway?

3) Keep track of how often you criticize yourself vs. encourage yourself 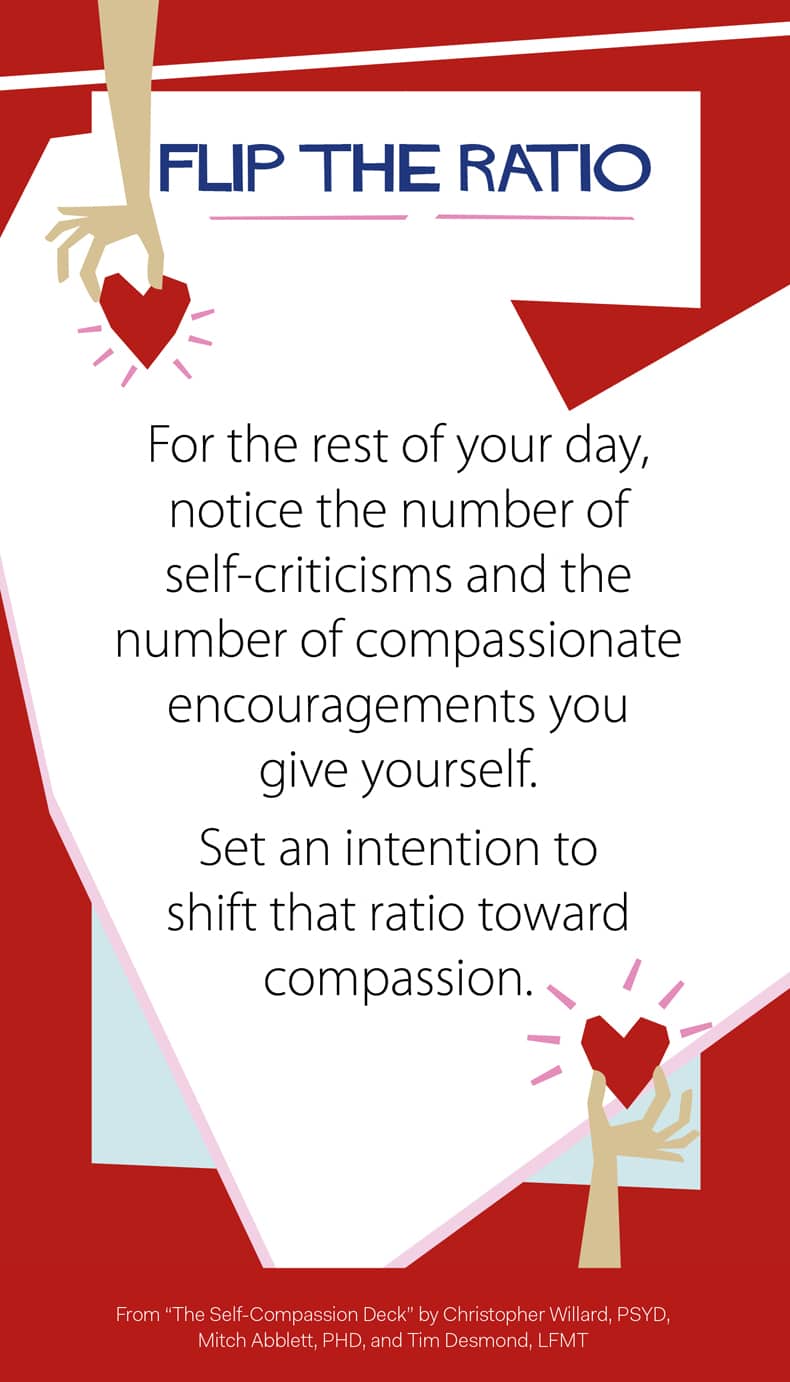 Perhaps your self-compassionate act for today would be to actually do what this last card suggests—keep track of how often you criticize versus encourage yourself.  I’m serious: perhaps you could keep track with tally marks on a scrap of paper or on a journal. Being honest and willing to pay attention this closely to yourself is itself a great act of self-compassion. We don’t often give ourselves this much time out of our busy lives. Instead of all the tally marks on holiday to-do lists, perhaps we can tally up our relationship with ourselves?

Germer, C. (2009). The Mindful Path to Self-Compassion: Freeing Yourself from Destructive Thoughts and Emotions. Guildford Press.

Neff, K. (2015) Self-Compassion: The Proven Power of Being Kind to Yourself. William Morrow Paperbacks.

Take Three Minutes to Bring More Mindfulness to the Holidays

Living with, and Loving, Your Imperfect Life

6 Mindfulness Books to Read This Spring

From unwinding anxiety thought loops to exploring mindfulness for adult ADHD, here’s what the editors at Mindful are reading this month. Plus, three mindful podcasts in our playlists. Read More

Uncover the Mindful Moments Hiding in Your Work Day

Jen Fisher shares three of her top tips for incorporating the habits of mindfulness into a busy daily routine. Read More