I recently bought a new smart phone because I ran out of memory on my old one—a move that is akin to cluttering up one room and, instead of taking the time to clean, starting to fill up another bigger room.

As a parent in the digital era, I snap pictures like crazy. I send one image after another to my husband, documenting my day with the children in fragments that he can piece together remotely. Each image sent to him seems to stamp the moment with more value, and yet, ask me two days later what those snapshots were and why, and it’s likely I’ll just look at you with a blank stare before changing the subject.

While perusing through Mindful.org, I came across an article about the slow-photography movement—a mini-rebellion against the tendency to photograph every detail of every moment.

Author Tim Wu says, “Our cameras are so advanced that looking at what you are photographing has become strictly optional.” He says that the ability to document our surroundings without even seeing them causes us to lose “the experiential side, the joy of photography as an activity.” Wu’s notions got me thinking about my own documentation addiction, and then, subsequently, a very special plastic toy camera.

Our cameras are so advanced that looking at what you are photographing has become strictly optional.

Years ago, my daughter, Opal, who is now seven, played incessantly with a Fisher Price toy camera. It doesn’t take real pictures. The viewfinder has the perpetual image of a cartoon dog wearing a Hawaiian shirt and smiling into the blazing sun with a sailboat in the background. The camera is battery powered and when you push the purple button on top, a perky woman’s voice says, “SMILE!” followed by the faux-click of an old-fashioned instamatic.

When Opal was a pre-schooler, she went through a phase of shooting fake photos all over the place with her toy camera. She would line up the shot, as if framing an actual scene or portrait, and then hold up the camera for me to have a look. As we both gazed at the image of the cartoon dog (that looked increasingly psychedelic the more I looked), she’d say something like, “Look how high the bunny jumped in this one!”

Her grandma and grandpa bought her an actual camera for her birthday around that same time, a little digital thing that was about as basic and hardy as they come. The gift came from my recommendation—I thought that her interest in fake photography would translate to real photography. Not so.

For months, she chose her fake camera over the real one, time and time again.

On one particular afternoon during that time, we took a walk with our yellow lab, Elvis, to a nearby duck pond. It was a gorgeous day, with a slight breeze and plenty of shade to blanket our path. Opal was in a documenting mood. She brought along her fake camera and was on high alert for photo-worthy subjects. (I can recall them all now because I wrote them down in a frenzy on that very day.)

I experienced our walk on a deeper level than I ever had before—steeped in curiosity and noticing.

“Stop the stroller, mommy! I need to take a picture of this!” The yellow nub of a dandelion had squished onto the sidewalk through a crack in the cement. Click.

We continued. “Stop, mommy, look at those!” The field to our right was shrouded in tiny deep-purple flowers. Click.

She held the camera up, in the attempt to show me what she saw.

“Look, honey,” I said and pointed at another viney white wildflower that grew along the sidewalk like a border.

“No, mommy. I already have enough pictures of the white ones.”

This was a route Opal and I had walked dozens of times, but on that particular day, she decided that everything deserved a closer look. And, not surprisingly, I experienced our walk on a deeper level than I ever had before—steeped in curiosity and noticing.

As I was leaving for work later that day, doing my normal exiting rounds, I found myself thinking click as I scanned to make sure all the red lights on the stove were off, click as I dog-proofed by shutting the doors and putting all the food away. And as I was pulling out of my driveway, I was not plagued with my familiar, half-brained need to stop the car and run back in to re-check that the stove was off and that I hadn’t left a bar of dog-toxic chocolate on the counter.

Days later, I continued to carry around the images of nearly all the things we stopped to admire through the lens of her toy camera while on that walk. And yet, when I shot photos with my real camera, I often felt further away from my subject than before. As if the act of documenting had subcontracted the need for my thoughts to hold onto anything beyond the surface of the moment, if even that.

…when I shot photos with my real camera, I often felt further away from my subject than before. As if the act of documenting had subcontracted the need for my thoughts to hold onto anything beyond the surface of the moment…

Flash forward four years to the present time. The plastic camera had been liberated from the archives of baby things and made it into the plump little clutches of our one-year-old foster girl.

On a recent and particularly harried morning, trying to get ready for the day while the baby screamed, snuffly with a cold, Opal melted into a state of panic that she would be late for school. I could feel how wound up we were getting.

The fake camera was in the backseat of the car and I hadn’t seen it. The baby had grabbed it and those battery-powered words stopped us all in our tracks.

I knew better than to resist the fact that I had just stumbled into mindfulness, inspired by a toy plastic camera. One of those moments where I didn’t exactly have access to mindfulness on my own, but was ready and willing once prompted by an outside source—plastic, unexpected, and dotted with sticky jelly as it was.

The space hung around for another second before I locked eyes with Opal in the rear-view mirror and we both began to crack up. It was a complete and utter re-boot, one that I did not snap a picture of and send to my husband. But there was no question Opal and I would remember it fully and completely to share with him in person over dinner.

Noticing the world with open non-judgemental awareness is a key mindfulness practice. “Every experience is unique, and there are an infinite number of causes and conditions that lead up to each moment,” says Susan Kaiser-Greenland in her new book Mindful Games. Try this practice from her book to explore noticing without judging if something is right or wrong.

In this practice we pay close attention to a drawing that looks like both a duck or a rabbit, to better understand how some things can be more than just one thing. This is great to do with kids of all ages.

1. Let’s look at the drawing together. Show everyone the duck or rabbit drawing. 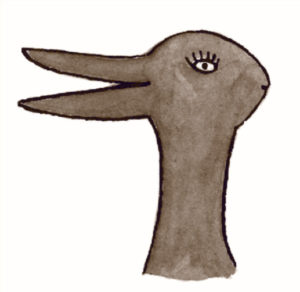 2. Is it a duck or a rabbit?
Wait for children to answer, and then offer your guess too. (If either the duck or rabbit wasn’t selected by any of the players, choose that one and explain to children how it can be seen as that animal too.)

3) Look again, and see if it looks different to you now. What do you think? Is it a duck or a rabbit?

5) Let’s look at the drawing one more time. What does it look like now? Did you change your mind?

Talking points: Do you think the drawing is really supposed to be a duck or a rabbit? Could it be both?

Tips: Amy Krouse Rosenthal and Thom Lichtenheld have created an ingenious picture book based on the duck/rabbit drawing that you can read with your child to extend your conversation about these talking points.

Noticing: Connecting with Our Kids

This engaging meditation uses the energy and imagery of roads to foster inner connection and emotional regulation. Follow the guided practice and join your child on a mindful adventure. Read More

Heather Campbell Grimes is a blogger, freelance writer, and stage performer. Heather is also a massage therapist who specializes in working with elders who have Alzheimers and dementia. She is a devoted mother and foster-mother, and she lives with her husband and family outside Boulder, Colorado. You can find Heather at hcgrimes.org.