1. Almost half of U.S. doctors report symptoms of burnout. They also work an average of 10 hours more per week than other U.S. workers and are nearly twice as likely to be dissatisfied with their work-life balance. Physicians in front-line positions (family, internal, and emergency medicine) are at greatest risk.

3. 5 times more likely to abuse prescription drugs. Physicians are as susceptible to alcohol or drug abuse as the general public, however they’re five times more prone to abusing prescription drugs. A 2009 study by the Mayo Clinic observed that substance addiction among physicians is typically advanced before identification and intervention because doctors want to protect their image. In the five-year study of 904 physicians enrolled in state physician health programs, alcohol was the primary drug of abuse in 50.3% of the physicians, opioids in 35.9%, stimulants in 7.9%, and other substances in 5.9%.

Doctor burnout is a now pervasive problem and doctors who are burned out are not simply exhausted—they treat their patients as objects, have less empathy for them, and feel a low sense of accomplishment. They suffer high rates of depression, substance abuse, and suicide. Their patients are suffering too, and getting a poorer quality of health care. Discover why your doctor is so unhappy and what some are trying to do about it in the October issue of Mindful magazine.

As the problem of physician malaise is pervasive, universities are responding by taking steps to provide their medical students with better ways to cope. Here’s what one university is doing to help students face the many challenges they will meet in their future careers.

In January 2015, medical students at McGill University in Montreal will take part in a mandatory Mindful Medical Practice program, an area of study the university previously offered only as an elective.

Stephen Liben, currently an Associate Professor in the Faculty of Medicine of McGill University and Member of McGill Programs in Whole Person Care, will become the director of the new mindful program. Liben states “McGill recognized that student stress and distress have become a major issue and they were open to approaches that might help students cope better. McGill has been very supportive and is, as far as I know, the only medical school to have a mindful practice course as a core (non-elective) course in the undergraduate medical curriculum.” 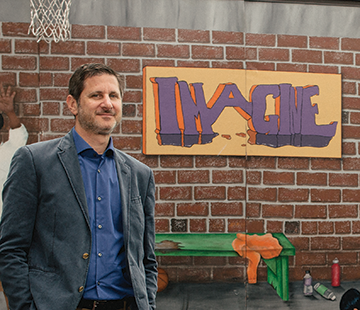 Dr. Stephen Liben, who will become the director of new mindful program at McGill University in 2015, is a pediatrician in palliative care at the Montreal Children’s Hospital. He has ample opportunities to bring mindfulness practice into his daily work. Photograph by Alexi Hobbs

Liben sees mindfulness as a way to help doctors manage the challenges that come with their work—everything from dealing with stress to conflicts with patients and their families. “Do they deal with it functionally, do they hide from it, or do they quit the profession?” says Liben. “You know, there are a lot of unhappy doctors.”

According to Liben, “There is good evidence that burnout is more prevalent in physicians today than ten years ago. Why should that be in a group of well-educated, well-paid, and well-respected professionals whose job is to help reduce the suffering of others?” Liben suspects that there are multiple reasons but whatever the root cause, he is concerned that “there is little attention placed on a physician’s resiliency and capacity to adapt as external changes take place.”

Liben emphasizes that “physicianship” encompasses the dual roles of the physician as healer and as professional. “If we are to take the role of physicians helping to create the conditions for healing seriously, then we need to use what we know about how to create those conditions and find ways to effectively embody and teach our students what we say we value. A mindful medical practice is one way this can be done.

“There is a knowledge-base and skill-set that mindfulness brings that dovetails with what we want to teach medical students in how to pay attention and how to listen. Mindfulness for medical students has the potential to help them focus and re-focus their attention as well as to improve their situational awareness. Enhancing situational awareness is already known to be essential in such disparate areas as preventing medical errors and in learning how to stay with emotionally difficult conversations that physicians have been shown to avoid—physicians’ typically interrupt their patients within 20 seconds of them speaking.”

What does Liben want participants to take away from the course? “Our hope is that each student will find, within the variety of experiential exercises offered to them throughout the course, some that they can continue to use to help meet the many challenges they will face as physicians.”

This article also appeared in the October 2014 issue of Mindful magazine.