Late one night, I found myself at the tail end of a party engaged in a deep discussion about womanhood. This discussion had gone on so long that everyone had left, except for the host, because she lived there, and one other guest, who had fallen asleep in a chair. At about 3:30 a.m., my friend and host decided to drop the bomb: “How can you say anything at all about women? You don’t know about us, because you’re not one of us.” That’s what you call a conversation stopper.

Though I regarded her assertion as an overstatement, it definitely made me think. How much can a man know about being a woman? We are told that each of us has a masculine and feminine “side.” This sidewise understanding has so entered the vernacular that a character on a cop show can say, “I don’t have a feminine side. Where my feminine side would be, there’s just another masculine side.” He’s probably not aware that gender is just a mental construct. 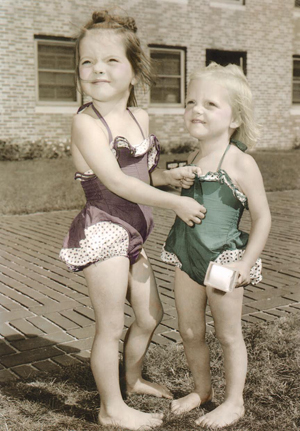 When we talk about having a “side” that is masculine or feminine or some combo perhaps, where is this side and what’s it made of? We seem to associate certain gestures, expressions, intonations, and ways of carrying ourselves with masculinity or femininity, but step too far into this and you’re in a snake pit. Consider the swirl of connotations around the word effeminate, which presumably could simply refer to demonstrating those attributes of the feminine side (again the side thing) of our nature but which sadly carries a derisive tone—as evidenced by my dictionary’s second definition: “characterized by weakness or excessive refinement.”

Yikes! I don’t know what it’s like to be a woman, that’s been amply established, but I have just a tinge of an inkling that this definition would anger me, because it angers me a bit as it is (or is that my feminine side talking?).

All of this would be nothing more than parlor talk for late night parties, except I am the father of two daughters and thus stand as an authority figure in relation to two women in the making. If I’m always saying, “That’s your mother’s department,” I’ll very quickly become superfluous, which the strong theory of woman-raising would already hold that I am, or at any rate should be.

I can’t know what it’s like to be a woman, but I know something of sisters, and even perhaps of sisterhood. It’s a beautiful thing to behold.

In the area of daughter-father relationships, the only models are wooden TV dad stereotypes. When the models are found wanting, one must turn to empirical knowledge, the kind gained from observation alone. And in this department, I’ve been well endowed. I can’t know what it’s like to be a woman, or even how exactly to be a dad to girls, but I know something of sisters, and even perhaps of sisterhood, if I may be so bold. I grew up with them, and in part I was raised by them, and now I am raising a pair of my own.

My sisters Mary Jane and Margaret Anne, MJ and Mog, were born after four brothers back in the days when families could be like small neighborhoods. The break in the torrent of testosterone was wildly celebrated by all, according to family lore. These girls, a year apart in age, would become my big sisters, separating me over a span of nine years from my brothers, who loomed like the giants Fasolt and Fafner in Wagner’s Ring.

I’m told that some sisters have distant or tempestuous relationships, but in my case I’ve observed a closeness such as I have rarely observed in two human beings. Perhaps hovered over by so many men, they forged a bond out of that indefinable thing they shared. Being young and dotable on, I could hang out with them and observe their ways. I watched as they gained stature and I watched as they were beaten about by the crises of teenage-hood, that roller coaster of ecstasy and abandonment. I watched as they left home, armed with a certain confidence in who they were, only to see that confidence sorely tested by what the world expected of women, or worse, what the world would not allow women to be. Whatever they thought might have been possible was often met with floodwaters of resistance. They responded damn well.

Through all of these trials of modern womanhood, I have watched, now from a distance, the steel rope of their relationship created so long ago only strengthen. It seems in the most difficult times it has been that simple, non-material, ineffable thing—sisterhood—that has provided them the most reliable source of sustaining power.

Now, from a different perspective, I have observed that same kind of bond developing in my own daughters. At times I have seen them able to extend it to others. As I watch them move closer to the day when they too will leave me to have their mettle tested by the world, I take some solace in the ever-expanding simplicity of their friendship. Indeed, I suppose I have no idea what it means to be a girl or a woman, but I know what’s possible between sisters, and it’s a beautiful thing to behold.

This piece is slightly adapted from one that appeared in the Shambhala Sun, July 2001. Since that time, Barry has become a grandfather, with twin granddaughters.

Healing Otherness with Compassion (and Sass)

Dr. Stacee Reicherzer, counselor and author of The Healing Otherness Handbook, is working to help people who are marginalized in society heal. Read More

What Mindfulness Brings to a Middle School Classroom

In her role as Mindfulness Director at a US middle school, Erica Marcus is helping students and teachers honor the difficulties of learning in the era of COVID, while also savoring the joys. Read More