On March 17, 1980, I began my journal entry this way: “Very painful day. Drank 4 glasses wine last night, felt today like hit with sledgehammer. Started out at work with a [verbal] slugfest, went downhill.”

After more downbeat rumination, I copied the first excerpts from a book I had just started reading. The book was Stephen Levine’s A Gradual Awakening (all excerpts in italics):

By gently letting go of everything—not through force, not by slaying it, but simply seeing all the content as passing show, as process and flow—we become the whole of our experience and open to our natural understanding.

If fear or wanting arises, it is seen within the spaciousness that surrounds it. We don’t get lost by becoming it, but simply see it as just another moment in the mind flow, another something which arose uninvited and will pass away in the same manner.

I didn’t know it then, but these words would gradually become the answer to slugfests and sledgehammers —a different way of being in the world, a way based on identifying what was happening in my body, mind and heart, not identifying with it. Over the years, many more words from Stephen Levine have appeared in my journal. When I learned in January of his death at 78, I was reminded how profoundly they have helped me.

As AGA puts it in its first paragraph: Meditation is for many a foreign concept, somehow distant and foreboding, seemingly impossible to participate in. But another word for meditation is simply awareness. Meditation is awareness. 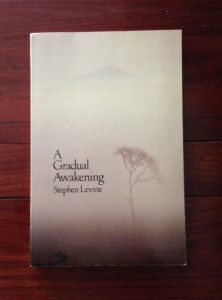 That was a message I needed to hear. By the time I came across AGA, as I refer to it in my journal, I had found my way into (and out of) my first meditation experience. Originally from Illinois, I’d gotten a job in 1978 (the year before AGA was published) at a newspaper in Rochester, New York. As it happened (was meant to happen?), my apartment was just down the street from a meditation center, with its pioneering Roshi Philip Kapleau.

Unmoored, unattached, homesick—a classic “quarter-life crisis,” in retrospect—I went to a weekend workshop there and, over the next few months, had the kind of strong experiences that beginners sometimes do (and get attached to). Sitting motionless for hours, hearing Kapleau’s (and Toni Packer’s) uncompromising talks, gave me a taste of concentration and an appetite for more.

Alas, my temperament was not suited to rigorous indoctrinated practice, as powerful as it could be for many. For my own reasons, I couldn’t take any more severity, even in the service of sublimity. So I stopped going, but kept up a homemade practice while I navigated the far fewer options for a meditation community than exist now.

Stephen Levine was my savior (that’s ironic, but with a small “s” it is not untrue). Even the book’s title—gradual—felt like a relief from the sudden-enlightenment school that just stressed me out. (And that is both the goal and the method; the beauty of this meditation. Every moment of practice is also the goal of the practice: mindfulness, simply being awake to what is.) His clear and kind words reached out and grabbed my mind by its lapels. Re-reading a few random paragraphs could usually ease me back into a more spacious mindset.

On November 14, 1980: “A daily meditation practice seems to be a necessity for the development of awareness and clarity.”

This seemed to register, as I began taking note of my sits in my journal, and they became nearly daily.

On December 12: “Dream last night. Saw shrink. She asked me—analyzing dream I had; have I ever dreamed about dreaming?—‘I didn’t think it was possible to unify your psyche.’ ‘Meditation has been very helpful,’ I said.”

Three days later I took a whole page of my journal to carefully draw, in all capital letters, with curlicues for the “I” and the exclamation mark dot, the word SIT!

December 6, 1981: “Sat 30 minutes twice. How much noise there is, and how much sitting helps to re-establish awareness.” As long as we’re identifying with content, we’re not really free. The difference between being in bondage and being liberated is the difference between thinking and recognizing thought as thought.

I’ve learned in person from great teachers, but I never actually met Stephen Levine—transmission can come in many ways.

A couple of years later I moved to Washington to help start USA Today, and gradually found plenty of people to sit with and teachers to learn from. With a few friends, I have been sitting informally, followed by potluck, for more than 25 years. I’ve done retreats, I’ve learned in person from great teachers, but I never actually met Stephen Levine—transmission can come in many ways.

For many, Stephen is known more for his work on death and dying and other topics than for his mindfulness teaching. He worked with Elisabeth Kubler-Ross and wrote Who Dies?; he brought a spacious compassion to people dying miserably from AIDS in the 1980s; he was a poet, meditating on life and death; he met with prisoners and reminded one, who said he didn’t have time to meditate, that “since he was doing fifteen years, he had nothing but time.” He lived in the wilderness and wrote Planet Steward. Before any of that he helped found the counter-culture San Francisco Oracle in 1966. He and his wife, Ondrea, wrote together about relationships. Bound by illness the past few years to his home in New Mexico, they continued to teach via Levine talks. And his son Noah has become a well-known teacher in his own right, carrying on Stephen’s legacy with a focus on addiction and recovery.

Speaking of which, I don’t drink anymore, not on principle but because it wasn’t helping my practice (and because it began to feel like I’d been hit by two sledgehammers the next day!). I realized the hard way that verbal slugfests were not doing me or anyone else any good, and I’ve vowed to leave them behind. (Striking out at somebody in anger is not a very creative or wholesome event in our life. There are a lot of other ways we can deal with this. … We can trust ourselves when we acknowledge our anger, when we acknowledge our fear. … When we cultivate the mindfulness that can accept them, we acknowledge our wholeness, and see it all as it is. Just more stuff, more bubbles passing through the vast space of mind.)

These days, I don’t need to admonish myself in capitals with curlicues to SIT! every day, and I don’t feel that “rumble of panic underneath everything” (as Ernest Becker phrased it) that I did so many years ago. Instead, at 63, I keep my focus on the simple but profound lessons Stephen shared so clearly – awareness as our mutual foundation, strong and gentle enough to embrace whatever arises. And I count myself fortunate to share this path of gradual awakening with so many.

But before I found others to walk it with, Stephen Levine was my unfailing guide. After so long, he still is.

Healing Otherness with Compassion (and Sass)

Dr. Stacee Reicherzer, counselor and author of The Healing Otherness Handbook, is working to help people who are marginalized in society heal. Read More

What Mindfulness Brings to a Middle School Classroom

In her role as Mindfulness Director at a US middle school, Erica Marcus is helping students and teachers honor the difficulties of learning in the era of COVID, while also savoring the joys. Read More

Dan Olmsted lives in Falls Church, Virginia, and is a longtime journalist. He edits the Website AgeOfAutism.com and co-wrote a book of that title.