My sister’s son, my nephew Joseph, died on April 10, at 36. At his funeral ceremony, I learned from his sister that every year on his birthday he went to the Hayden Planetarium in New York. I hadn’t realized that it was a passion we shared. It would have been great to do it together. In 2002, I wrote a piece about it, which I would like to share here, in Joey’s honor.

Humans like to take the measure of things, and sometimes it saves a great deal of time to measure space. The other day two deliverymen were moving a refrigerator into my smallish kitchen. I offered them the tape measure several times, but they looked at it with disdain, preferring to eyeball the situation and muscle the refrigerator through. After taking several gouges out of the woodwork, they soon discovered what the tape measure would have told them: door number one would not admit the fridge.

Measuring the galaxy and beyond, however, far exceeds the capacity even of my Stanley Fat Max industrial-grade tape measure. To take the measure of the cosmos, you require the Rose Center for Earth and Space at the American Museum of Natural History in New York, which houses the newly built Hayden Planetarium. I used to love to go to the old Hayden-or any planetarium for that matter-which employed Zeiss’ standard planetarium super-duper gizmo, a robot-like affair that recreated the night sky on a domed ceiling. Upon entering a planetarium, which one tends to do in the clear light of day, one is able to recreate the experience of drinking in the Milky Way, normally available only in the mountains on a clear night far from city lights. This grand entrance has always been a delightful experience of being absorbed into the beyond and incidentally educated by the soothing narrative that always accompanies the show. 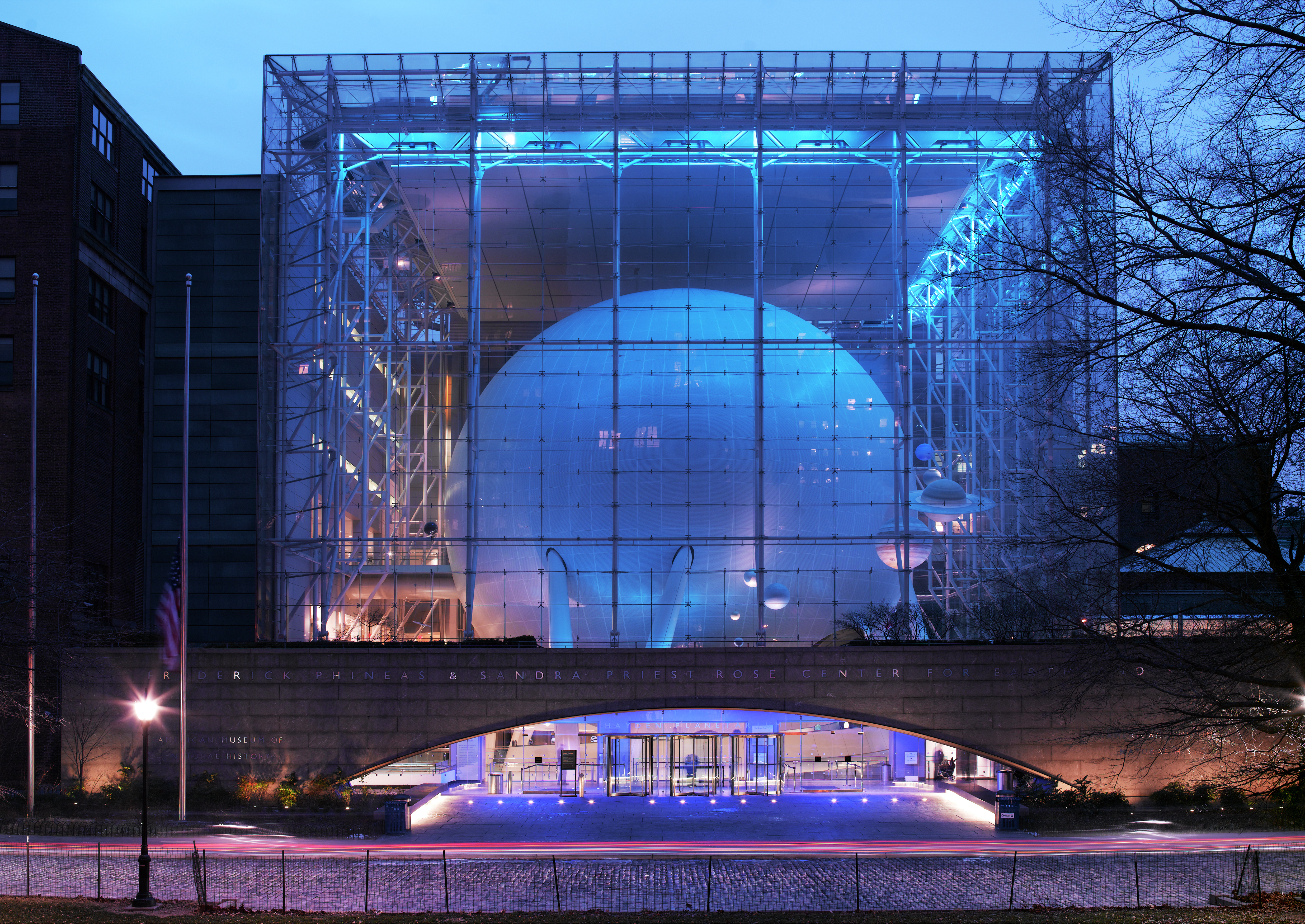 The Rose Center takes the experience to a whole new level. It is an architectural tour de force: an 87-foot sphere contained within a 95-foot-high glass rectangle. (Don’t worry. The bottom of the sphere dips into the basement.) When you enter, the natural place to start is in the planetarium contained in the upper part of the sphere. Not content to stop at the visible night sky, the new Hayden draws on information from the Hubble telescope and other advanced research to show us the picture of our night sky from beyond our night sky, and our solar system from beyond our solar system, and our galaxy from beyond our galaxy, and the Local Group of galaxies (33 in all) from beyond it, and the Virgo cluster of galaxies (150 large and over 1000 small) from beyond it, and the Virgo supercluster of galaxies (forget about it)…until we are asked to take in the whole known universe.

To ensure we won’t get lonely, they always pipe in the baritone voice of a major Hollywood actor. The current show [Ed. note: 2002], which is about the possibility—nay probability—of life on other planets, is narrated by Harrison Ford. But even the familiar Hollywood voiceover cannot diminish the awe and pusillanimity one feels in the presence of so much space. When you see these worlds within worlds and learn that astronomers are starting to discover planets orbiting stars that had previously eluded discovery because of the light pollution from the star itself, it reduces not only your self-centeredness but your very Earth-centeredness to dust. It seems inconceivable that in these unfathomable depths there is no more life than exists on our measly planet. But even if there is no more “life,” as we like to call it, there is tremendous life. There is the life of stars being born and dying, of planetary systems collapsing and coagulating into new forms.

After you emerge breathless and big-minded, you now stand outside the great sphere on a balcony that surrounds it. On the railings of this balcony, scientists have used their great calipers to take the measure of the heavenly bodies. Using the unimaginable yardstick of scientific notation, you are told that the known universe extends to 1026 meters. As you walk along the railing, the exhibit uses models to give you a sense of scale. If the huge sphere is the known universe, then this incredibly tiny ellipse you see before you is the Local Group of galaxies, which the Milky Way is part of, and if the great sphere is the Local Group, then this tiny ellipse is the Milky Way and if the great sphere is the Milky Way, then this tiny ball is our solar system, and so on and so on until you’ve made your way around the ball to the tiniest sub-particle that has been encountered at 10-14 square meters. It’s a trip from the infinite to the infinitesimal.

With your sense of spatial scale now suitably shattered, you are ready to enter the sphere again to learn about the continuum of time. The process of deconstructing your limited clock begins with a show depicting the Big Bang, thought to have taken place a mere 13 billion years ago. Maya Angelou supplies the current [ed note: 2002] voiceover for this mind-bending experience. It’s the fight scene from West Side Story writ large, or the most violent riot-or hockey game-you can imagine. When you are ejected from the Big Bang, you travel along the cosmic pathway, a 360-foot spiral ramp representing the progression of time since the Big Bang. Each stride is about 75 million years. Recorded human history is literally a hair’s breadth at the end of the spiral. Whew.

When I leave the center, I usually have to sit on a park bench for awhile and remind myself of what was so bloody important in my life. Oh yeah, how am I going to fit the new fridge into the kitchen?

Create the Space for Change: It’s Your Time to Thrive

Recharge your mind and tap into something larger than yourself with research-backed tips for ending burnout and increasing well-being. Read More

Why We Should Welcome Emotions at Work

Do emotions have a place at work? In conversation with Deloitte Chief Well-Being Officer Jen Fisher, psychologist Susan David explains why it’s beneficial to make space for emotions, and tips for honing your emotional agility. Read More