You may be surprised to learn that these names were given not to nail polish, paint colors, or candies but to diverse varieties of a single vegetable. Most radishes, once planted, mature in less than four weeks, yielding edible roots in the gentlest pastels and brightest jewel tones. White or black, fist-sized or pebble-shaped, mild or punishing, no vegetable springs from its seed so readily or in so many disguises as the radish.

Perhaps we have this generosity of form to thank for its association with some of literature’s hungrier heroines. Scarlett O’Hara, upon eating a radish straight out of the dirt at Tara, swore she would never go hungry again. And, according to some accounts, Rapunzel’s mother yearned so powerfully for the radishes in a witch’s garden that she surrendered her infant daughter just to satisfy that craving.

If you’ve ever bitten into a raw radish, you know the assertive pungency unexpected in such a pretty morsel. The sharpness comes from sulfurous molecules and enzymes that produce, when chewed, a stinging, almost funky flavor also found in mustard and wasabi—a fact that makes radishes a very divisive vegetable.

I’ve seen children flee from them. I did. The tacquerias I once visited with my father offered mountains of Red Belles to snack on, trimmed and soaking in pools of ice water. They were mostly tasteless with an occasional hint of that punishing sharpness. I was not averse to vegetables as a rule, but I was averse to punishment.

But then something happened. I bought a clutch of French Breakfast radishes from the farmers’ market, oblong and dirt-caked and streaked with pink. Eaten plain, they were nose-burningly hot. But, when enjoyed thinly sliced with good salt and creamy butter, the effect of their pungency was not unlike that of a ripe French cheese, and soon the burn seemed more pleasing than punishing.

Strong cheeses are, of course, an acquired taste. But then so are radishes, and I seem to have acquired a permanent craving for them. I say craving because that is really the only word that will do. Radishes are not refreshing like lettuce, not hearty like kale, not sweet like beets. They belong, for me, somewhere to the left of the produce section. They savor of dirt, brie, yellow mustard. They are intense and unpredictable and hard to refine. Yet for all this personality and swagger, a single Red Belle or French Breakfast offers only one calorie of burnable energy.

Radishes at play in a salad, or getting top billing between two slices of bread: whatever you choose, eat with the kind of gusto you’d normally reserve for something richer. Notice how your hunger ebbs, and how quickly it surges again. If only Scarlett O’Hara had enjoyed hers a little bit more 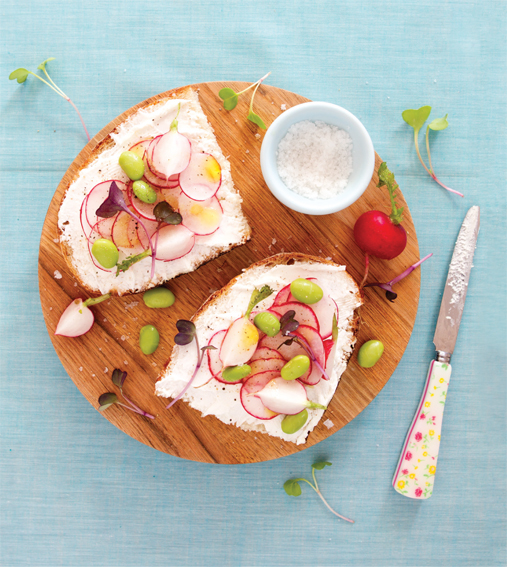 Spread the cheese on top of the slices of bread. Arrange the sliced radishes on top (about 2 radishes per tartine). Add the edamame and sprouts. Drizzle with olive oil. Season with pepper and fleur de sel. Serve with soup or a side salad.

Radish and Potato Salad with Goat Cheese and Tarragon-Lemon vinaigrette

In the bowl of a blender, add sea salt, pepper, lemon juice, zest, and garlic. Purée. Transfer to a bowl, then whisk in the honey and the oils to emulsify. Add the chopped herbs; set aside.

*Use a mandoline if you have one

Steam the potatoes for 10 to 15 minutes, until cooked through. Let cool before peeling. Slice them; set aside. In a frying pan, dry roast the sesame seeds on medium to high heat for a few minutes, or until they become fragrant; set aside. In a large bowl, combine the radishes, potatoes, carrots, and cherry tomatoes. Add the dressing and toss gently. Add the crumbled cheese and divide the salad among 4 plates. Sprinkle with sesame seeds and serve.

How to Manage Stress with Mindfulness and Meditation

Mindfulness meditation can help interrupt the stress cycle to allow space to respond instead of react. Discover our best tips and practices to equip you with tools to navigate stress. Read More

Most of us have an idea about what would make us happier: more free time, more money, more popularity. Robert Waldinger, a Harvard researcher, reveals that the key to a happy life might be right in front of us. Read More

GET YOUR Digital Guide