'Tis the season for publicity stunts, but this one seems more thought-provoking than usual. This season, one version of the Toys"R"Us Christmas catalogue features gender neutral photographs. There's a girl playing with a nerf gun, a boy dressing up a doll. You can see the full catalogue here. 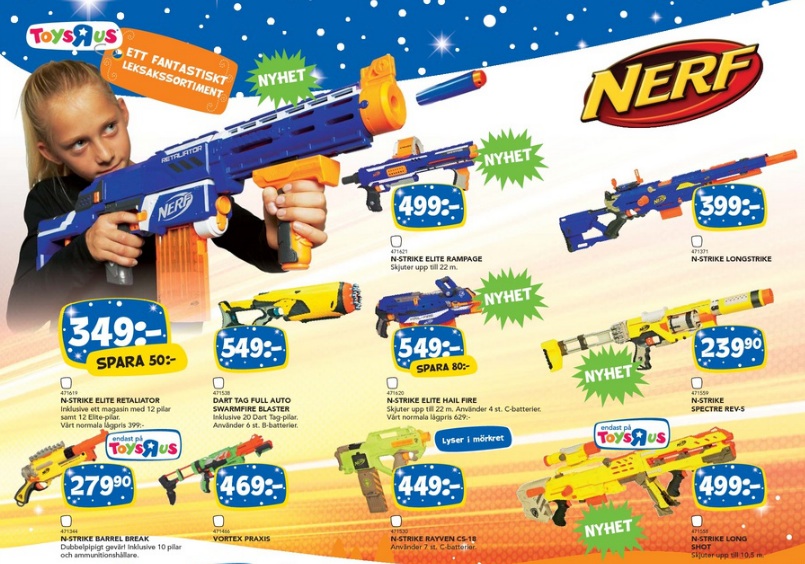 For those of you getting excited that we've appeared to make some sort of headway in introducing nuance into our gender stereotypes, you'll have to hold those horses. The catalogue is only published in Sweden. Further, not all images in the catalogue are gender neutral.

This publicity stunt, beyond being an excellent selling tool that could theoretically harness the buying power of both sexes for toys previously categorized for "just boys" or "just girls," points to what could be in store for our shopping future. Toys"R"Us was in part prompted to run this catalogue after receiving complaints about one of its past Christmas catalogues.

According to The Local, back in 2008, a group of Swedish sixth-graders wrote to the country's advertising ombudsman complaining about some of the imagery in a Toys"R"Us Christmas catalogue. The ombudsman's advisory committee then publicly reprimanded Toys"R"Us, noting that the catalogue was discriminatory “based on gender and counteracts positive social behaviour, lifestyles, and attitudes."

Taking this case into consideration, could there be grounds in North America for scrutinizing the harsh stereotypes we have when it comes to advertising? Should we be protecting our children from their own marketability?

Bad catalogues don't make us defacto bad parents, however. Elisha Goldstein, a clinical psychologist and Mindful's mental health blogger, suggests the best way to keep a constant and positive connection with your children is to mentally check in throughout the day, especially when you least feel like it. He says, "It's in the middle of the day when you're with the kids and feeling overwhelmed, you check out mentally thinking about how great it's going to be when they fall asleep and you can relax in front of the television."

Are our Christmas catalogues mentally checking out? Do you see gender neutral catalogues having an effect on parenting, or on how children perceive Christmas? Your thoughts and stories are welcome.