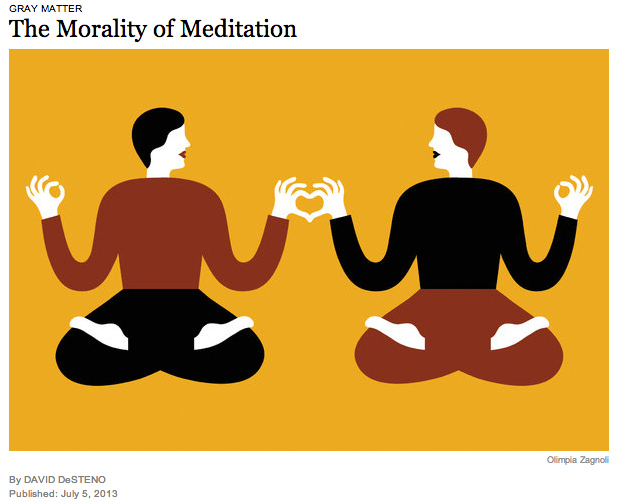 Can meditation reduce suffering? The question was put to the test by David Desteno, director of the Social Emotions Group and professor of psychology at Northeastern University.

Thirty-nine participants were recruited for the experiment. Twenty participants took part in an eight-week meditation course, and the other 19 told they had been placed on a waiting list for a future course.

Desteno describes the scenario both groups were put through, to test their response to suffering:

When a participant entered the waiting area for our lab, he (or she) found three chairs, two of which were already occupied. Naturally, he sat in the remaining chair. As he waited, a fourth person, using crutches and wearing a boot for a broken foot, entered the room and audibly sighed in pain as she leaned uncomfortably against a wall. The other two people in the room—who, like the woman on crutches, secretly worked for us—ignored the woman, thus confronting the participant with a moral quandary. Would he act compassionately, giving up his chair for her, or selfishly ignore her plight?

Desteno calls the results “striking”: 16 percent of nonmeditators gave up their seats, and the proportion rose to 50 percent among those who had meditated. He attributes the results partially to meditation’s ability to foster connectedness, and a recent study from Helen Weng, Richard Davidson and colleagues demonstrating that even brief training in meditative techniques can alter areas of the brain associated with understanding others’ distress.

6 Ways to Build a Culture of Compassion

Scott Shute, the head of Mindfulness and Compassion at LinkedIn, shares a few simple gestures that can help foster compassion in our workplaces, families, and communities. Read More